Thanks For A Great 2021 Season! See You In The Spring 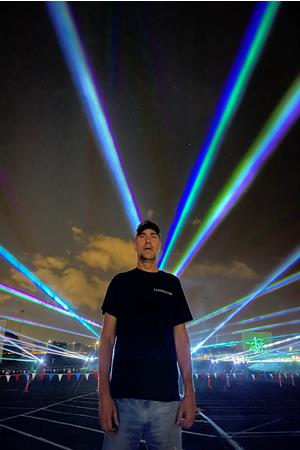 Today’s blog is really a feature story about the man who owns a laser show production company. He’ll be bringing his incredible drive-in laser show to Quassy on Sept. 9. Enjoy the read!

Bob Teorey doesn’t grow tired of hearing the oohs and ahhs during the spectacular shows he produces using light – laser light that is.

“I never planned on it turning into a career,” Teorey, 59, reflected on the business he founded in 1985. “I was in band lighting years ago and started working with a small helium/neon gas tube (red) laser as a hobby.”

To get his name out as an emerging “laserist” in the Minneapolis area, he did a lot of freebees and took his first paying job when a local politician wanted his name up in laser light.

“After that job, a light bulb went off in my head and I thought, hey, I can make a living at this. I started doing some planetarium laser shows and then worked into corporate events,” he added. “Back then, there was really nothing that would train you for this kind of business, so I really learned on the road of hard knocks.”

But two shows in particular - Laser Zeppelin and Laser Floyd (based on the music of legendary rock bands Led Zeppelin and Pink Floyd) - really helped propel Teorey’s company into the spotlight.

From there the sky hasn’t even been the limit for Laser Encore as the firm continues to branch out to satisfy a growing hunger for this unique medium.

But a lot has changed – especially in the equipment – during the 30-plus years of putting light to work to entertain crowds at various events and venues worldwide.

“When I started, we were using large gas tube lasers which required three-phase power and had to be water cooled,” Teorey noted. “In 2000 I started to buy solid state lasers known as YAGs. They emitted green beams of light through a yttrium-aluminum-garnet crystal and were great for aerial effects.”

As for the older, gas lasers he said: “They are powerful, but inefficient when it comes to operation. They need lots of power and produce wasted heat - thus have to be cooled with water. Some of the gas tube lasers were up to four feet in length”

Teorey built his company’s lasers for many years, but today purchases all solid state units from other supplies.

“To do more than three lasers at any location years ago was a massive undertaking,” he asserted. “It would take a truckload of gear. Four or five years ago were we using up to five lasers at any given show. Today it’s eight to 10.”

The older gear was expensive, too, costing “hundreds of thousands of dollars” for a handful of lasers to do a show.

“It’s still expensive, but we have more of it (lasers),” he said his current-day equipment.

And when it comes to producing a great laser show, Bob Teorey will be the first to tell you that bigger is not necessarily better.

“Brighter is the better word in our industry,” he said of putting on a spellbinding production.

The incredibly brilliant laser beams used in today’s Laser Encore productions are from what he calls “direct diode units.”

“We use rows and rows of these diodes to build and bump the power to get a high-powered laser system,” he said of the latest technology. “Each laser system can produce any color, shape or graphic – wherever your imagination takes you.”

The new lasers are super-efficient as well, with each drawing only around three amps of electricity. And don’t worry about cooling them with a continuous flow of water either – those days are gone.

Teorey further explained: “Each system can be controlled individually through a network. That individual control makes for a more spectacular show.”

A computer controls the entire laser show with custom software synchronizing the laser graphics, aerials beams, and music and fog machines. Laser Encore has its own art department to create its productions and a new show takes around six months to produce.

Adding to the spectacle, foggers used in conjunction with aerial effects can form sheets, waves and even tunnels of light.

Using light as a tool (photonics) and for entertainment is nothing new, but there are some dangers in working with high-powered lasers.

“The most danger is for the operator when equipment is being worked on,” Teorey said. “Of course, the further you are away from the light, the more it gets defused. Our lasers will not burn nor blind you, but the worst case would be like having a flashbulb going off in your eyes. We are very careful not to scan the lasers into the audience at any show.”

When it comes to tackling projects with a national audience, Bob Teorey is no stranger. He has had the privilege of staging productions at the Super Bowl, NHL All-Star Game, Final Four, theme parks and some large fairs and festivals.

As for the best show ever produced by Laser Encore, Teorey says, “that has happened a bunch of times. It seems that when I think we have put on the best show, we top it somewhere down the road.”

In addition, owning a laser and special effects production company is not a 9 to 5 job.

“We have traveled around the world - doing a lot of work in Europe and South America,” he added.

When the COVID pandemic seemingly brought the world to a halt last year, Bob Teorey didn’t waste any time in coming up with a concept to keep him working when social distancing became the norm.

“We were booked solid in normal years and I would have set a record last year with contracted events before it (COVID) hit,” he said of the 2020 schedule.

So, to keep his equipment on the road he came up with the idea of a drive-in laser show. The concept was an immediate hit as empty venue parking lots were filling to (show) capacity to see a 30-minute show – most patrons watching from the safety of their cars.

“Now we’re getting slammed with these drive-ins,” he emphasized. “We did our first one last July and got to the point where we were doing two a weekend, so I had two crews out.”

They are full-fledged laser shows, too, as the company presents its newest production of Laser Hitz, a 30-minute montage of classic and current rock and popular music. Laser graphics are projected on a huge screen set up at the center of the production with aerial lasers and fog machines both sides of the screen.

For the convenience of attending guests, the sound is broadcast via an FM transmitter for in-car reception and at many shows there is also some sound amplification