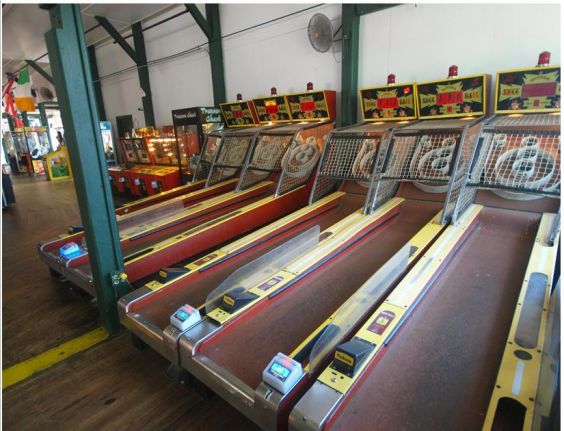 We’ve had Skee-Ball alleys operating in the park for as long as anyone can remember.

Years ago the lanes were set up in a smaller makeshift building behind the huge arcade. Today, the junior bumper cars occupy that space.

After finally finding a home in the big building at Quassy - they have been there ever since – Skee-Ball still draws its fair share of patrons to this day.

The interesting thing about Skee-Ball is that the game has lasted for generations. There’s something that even our youngest guests enjoy about rolling those hard balls up the lane and watching them drop into the holes, racking up a score with almost every toss.

The company’s rambling history reveals it has been bought and sold more times than we care to count, bouncing around like a rubber ball to new locations in nearly every sale.

At one point Skee-Ball was owned by the Wurlitzer firm, which made band organs. After a period of time Wurlitzer realized mixing arcade games with musical instruments was not the match made in heaven, and sold off the Skee-Ball operation.

If you’ve been around the amusement park business for any period of time, you know that distinct sound of the balls rolling on the cork runways.

There’s an occasional victory yell from a player who nails the 100-point hole at the top left or right of the scoreboard – all part of the ritual associated with the  sport.

It’s no wonder that Skee-Ball has been around as long as Quassy - dating back more than a century- and new units are made to this day in Wisconsin.

So on your next visit, turn off the cell phones and play a classic. It will be music to our ears!